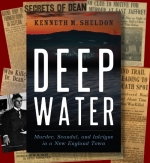 Author Kenneth M. Sheldon will read from his newest book, Deep Water—Murder, Scandal, and Intrigue in a New England Town.

In the waning days of World War I, William K. Dean was brutally murdered, his body hog-tied and dumped in a rainwater cistern on his farm in Jaffrey, New Hampshire. Suspicion quickly fell on Dean's wife, an invalid in the early stages of dementia. Her friends pointed instead to a former tenant of Dean’s, whom many suspected of being a German spy. Others believed that Dean's best friend Charles Rich—a politically powerful banker and judge—was involved.

“Deep Water is a true story with all the elements of a classic Agatha Christie mystery,” says Sheldon. “It has multiple suspects, red herrings, and enough plot twists to keep you guessing until the end.”

Deep Water is based on Sheldon’s extensive research into the Dean murder, which included thousands of pages of FBI documents, grand jury testimonies, newspaper accounts, private correspondence, and the archives of the Jaffrey Historical Society. “I began writing Deep Water because I thought William Dean deserved justice, even at this late date,” he says. “The truth needed to be told, to whatever extent I could uncover it.”

Sheldon was formerly the West Coast Bureau Chief for Byte Magazine. His writing has appeared in many publications including Yankee Magazine and New Hampshire Magazine, where he has been a regular columnist. He is the author of several books, including Welcome to Frost Heaves, a collection of Yankee humor written under his pen name Fred Marple.

Sheldon will read from Deep Water, discuss the process of its writing, answer questions, and sign copies of the book, which will be available for sale. The event is free of charge and open to the public. It is sponsored by the Friends of the Hooksett Library.

Registration is required for this event. To register, please provide the following information:

Email reminders are sent 24 hours before the event takes place.

If this event is canceled, we will use the contact information you enter here to get in touch with you.